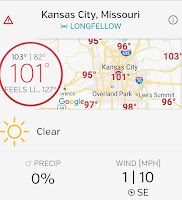 It took us a day and a half to drive from Appleton WI to Maize KS, just outside Wichita.  While the temperature was a bit higher in Maize at 104, the heat index for Kansas City, three hours north and our next stop, was 127--later it reach 129.  Levels I had never seen or experienced.  Believe me it was quite hot enough around Wichita!

We were in Kansas to visit our wonderful cousins, Andy and Lois Sciolaro.  We try to visit them annually and they in turn typically visit us in the Finger Lakes annually as well.  They always have things for us to see and do in Kansas and Oklahoma.  We have learned a lot about the prairie and have come to have a deep and somewhat unanticipated love of the region.  As we review our options for this trip over dinner, we all reluctantly decided that the oppressive heat would not permit an enjoyable trip down into Oklahoma.  So we decided to stay closer to home, which is in Maize KS.

As usual, we got started in late morning, actually early afternoon with a visit to Frank Lloyd Wright's Allen House in the College Hill district of Wichita.  As is usual, they do not permit any interior photography but I did capture some nice shots of the exterior including the gardens.

This was Wright's final house in what he called his Prairie Style.  It was completed in 1918.  It seems fitting that the last Prairie Style house would be located in the Kansas prairie albeit in a residential area.  Our guide was very knowledgeable and pleasant.  The interior tour was very complete getting us into every room in the house. 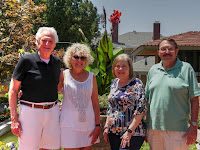 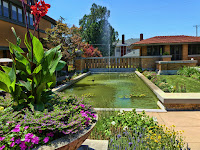 The tour ended in the gardens adjacent to the house.  Unlike some other gardens we have visited in the summer, this one displayed colorful plants of all sorts organized around a water pool that looks like a swimming pool but is not one and was never used as one.  The Allens had only one child out of five who survived to adulthood and she was 18 and off to the University of Kansas the year they moved in.  That year Henry Allen began serving two terms as governor and then two years as U.S. Senator.  So the house was never a "family home."

You can view more photos in Maize Kansas Visit Album by clicking here. 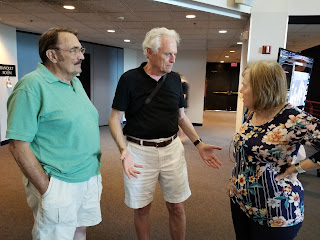 We left Wichita to drive north to Hutchinson KS and the Cosmosphere.   We had visit here on a previous trip--Click here for a blog of that trip.  We returned for a viewing of the NASA produced movie celebrating the 50th anniversary of the moon landing.  We tried in vain to contact the center by phone to determine if there were tickets for the 4:00 show but not able to.  So when we got there we learned that it was sold out.  Undaunted we decided to try a return trip the next day depending on the weather.  In lieu of the movie, I provided a helpful lecture on the importance and history of space travel. 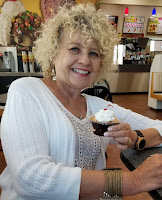 We then dined at the Barn Grill in Burrton KS which features "authentic Kansas cuisine."  No kidding; you can look it up.  Unfortunately I couldn't convince Marilyn to split a chicken fried steak dinner with me so we had to be content watching Any and Lois eat that delicacy.  However, after dinner we stopped at their favorite ice cream place--Braum's--where Marilyn did see her way clear to consume a sundae, a small one, but still.

The next morning we had a decision to make depending on the weather.  Thankfully there was a cold or at least cool front moving in.  So the temperature would moderate but there would likely be thunderstorms generated by the change in temperature.  If the rain held off, we wanted to go to a concert at Bartlett  Arboretum in Belle Plain KS about 45 minutes south and east of Wichita.  If the cold front alowed down and it remained hot, we would return to the Cosmosphere to see the NASA film.   After Andy spoke directly to one of the NWS forecasters at the Wichita Airport, we decided to go to the concert since the rains were forecast for later in the evening.  We forgot one thing.

The rain held off but so did the cold front.  The beastly hot temperatures on the prairie are made a bit more bearably with a constant breeze.  In the two hours before the cold front, the air went deathly still which made the concert site unbearable.  During the break, we gathered up our stuff and retreated to the car and a cool drive back to Maize.  As we arrived home, the wind picked up and cold front began its passage dropping the temperature 15 degrees in an hour.  We spent the rest of evening on the screen porch talking and playing a version of balderdash.

We look forward to Andy and Lois visiting us this Fall and to spending time with them on the prairie.

Click here to see all the photos from our time in Kansas. 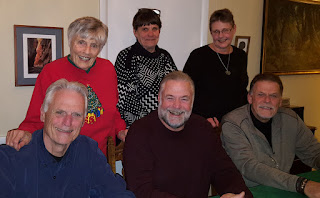 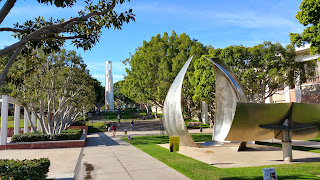 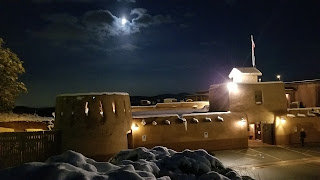